It’s fall again. I seriously can’t believe it’s already October and I’m planning for the spring and summer of 2015. The summer just flew by :{ October is one of my favorite months. The trees up north become bright and magical, the sunlight at dusk is gorgeous, and I can comfortably wear my sweaters and shorts, and jeans with t-shirts and rock the boots. The change of the seasons inspires me to embrace the yearly transition incorporating seasonal activities, regimens, and foods into my routine.

Here are some of my top foods for health in the fall.

1) Oysters: I used to be so scared of these slimy little guys, but I have not only gotten over my fear, but have grown to love them! While you can eat them all year long, the best season for oysters is the “ber”, September, October, November, and December. I love Fisher’s Island East Coast Oysters if I am going for a zesty fresh salt water oyster, to be topped with tobasco and horseradish sauce. On the West Coast I crave the Kushi oysters, they are a delight. They practically melt in your mouth, are very meaty, and taste of fresh butter, so you don’t even need extra condiments. Aside from the first benefit of oysters being an aphrodisiac, oysters are loaded with more zinc than any other food found. Their skin is loaded with natural protein, and they have high amounts of iron, calcium, vitamin c, and omega 3. 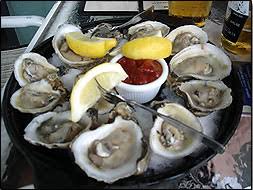 2) Apples: Apples are a great fruit to work with. They have versatility in the kitchen. I chop them up and use them in salads, top them on appetizers, apple pies, cut them into slices with peanut butter, and smash them into purees. Apples are high in fiber with 4 grams per serving as well as high in antioxidants. The high season for apples is between August and November.

3) Parsnip: It sounds a bit weird maybe even boring, but parsnip is actually a sweet and nutty food. Found October through April parsnip is high in fiber and potassium which is great for athletes and gym buffs. It can be cooked into a soup puree, sliced into pasta like slices and topped with sauce, baked in the oven as a veggie side, or even mashed into a potato like puree.

4) Pumpkin: Another season favorite, although it seems to get over played and old quick. Pumpkins are loaded with vitamin b, potassium, 20% of fiber content, and they are delicious! Pumpkin season is October – Feb.

5) Sweet Potatoes: They are high in iron, vitamin a, and act as an anti-inflammatory which will help with sinus problems, joints, and other tension during the cold weather season. They also promote fertility in women. Don’t boil them, it reduces the vitamin content.

6) Pomegranate: Sweet and tangy, pomegranates are high in antioxidants which promote cell renewal. Nice hair and skin. The antioxidant level is higher than red wine. They also have vitamin c and folate. Found August through December. You can eat it raw, mash it up in a smoothie, or top it on a salad.

7) Kiwi: I never thought as kiwi as a fall fruit, but the season is September through March. They have more vitamin c content than oranges, and they are low in fat. The high fiber and potassium is great for eating after a workout, and they also have copper.

8) Dates: September through December is the high season for dates. Sweet and sticky they are also versatile. They are high in potassium and loaded with natural sugars that will give you a boost of natural energy. Regular consumption promotes healthy bacteria in the digestive organs. These are a great treat alone, or you can turn them into a mouth watering appetizer. Slice out the pit, add a slice of aged cheddar, and wrap in a tiny slice of bacon. Cook for 15-20 minutes and voila! You have a bite size appetizer that is great for Sunday football or cocktail parties.

9) Blueberries: Typically the season runs late June through August, but you can buy them all year round. They are great for boosting the immune system and protecting against colds and the flu. Top them on some Greek yogurt or cereal in the morning. They also reduce stomach aches and diarrhea. :}

10) Cranberries: Eating these on a regular basis will protect against urinary track infections. Laboratory studies have shown that cranberry extracts can prevent breast cancer cells from multiplying. Other studies showed that cranberries helped to inhibit the development of cancerous cells in lab animals. Consuming cranberries on a regular basis can help you to avoid dental problems such as gingivitis, um disease, cavities and plaque build-up.Cranberries are high in antioxidants, which help to flush out your system. This in turn improves your metabolism and digestive system resulting in losing weight quicker.